Purge me with Hyssop 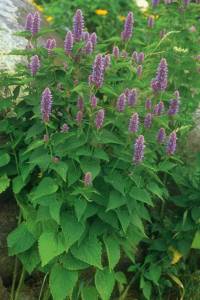 From the time I first became aware of it, I have associated hyssop with the healing blessings of Goddess Brighid.  I do not think this association is traditional; I have certainly seen no trace of such a correspondence in any books on magical herbalism.  We are told that this herb’s planetary correspondence is Jupiter; that it is associated with the Chariot card in the Tarot (this according to Paul Beyerl); that it protects against pestilence, burglary, and all evil sendings; and that it is best gathered at the time of the Cancer New Moon.  Beyerl also gives associations with amethyst, a favorite stone of mine (both for friendship with the living, and a peaceful transition for those crossing the Veil to the Summerland); he also gives an affinity with lapis-lazuli, which I have always thought of as carrying a strong magical energy from the days of ancient Egypt.  It was frequently used in their necklaces, which were cleverly worked charms; and one can still feel the strength woven and forged into those enchantments thousands of years later, standing in a museum and looking at the jewelwork in a glass case.

Robert Graves spoke of hyssop as being deeply involved with the season of Yuletide, and especially with that sacred moment of the Winter Solstice: Alban Arthan as the Druids name it.  And as the Samhain full moon wanes out into the peace of the Fallow Tide of the Year, it is natural for one’s thoughts to turn to the rest and time of dark tranquil contemplation that for many of us precedes the lighting of the Yule log.  (Somewhat difficult if one lives in a typical modern American or European town, with garish “holiday” decor, cheap tawdry ornaments and cacophonous “festive” music blaring from every public corner, but we do what we can.)  As I write these words, I have lit the candles and offered incense at my House altars, and I have some hyssop essential oil diffusing as well with the aid of a tea-light under a specially made dish.  The soothing, purifying atmosphere bestowed by this sweet, natural odor cannot be denied.  I have been playing the recordings of Ani Williams sacred to Hathor, to Isis, to Osiris, to Sarasvati, sensing the rippling of Nile water as Winter begins to draw in.

Work with essential oils adds another note to the tapestry of herbal power: so too does the presence of tinctures and the balm of the crushed dried leaves of the plant.  The potent remembrance that there is a fineness, an essence, a sharp dizzying note of music that survives the darkest winter night, the coldest breath of frost, the most final curtain of night’s baleful abysm.  Hyssop comes on white wafting wings to bring purity, potency, peace evermore.  Blessed be.

2 Responses to Purge me with Hyssop