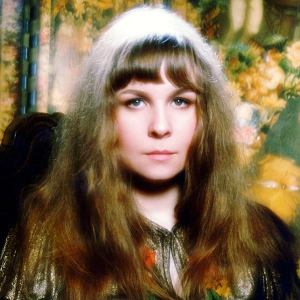 In spiritual life, the thread of bardic inspiration seems to grow all the more cherished, enjoyed, and exalted as the days go on.  For me, a particularly potent Bard who came into my life a few years before I began my formal Craft training was Sandy Denny.  Two or three songs by her were on a mixtape sent to me by a penpal who used the name BillyZilla.  Something about her voice, strangely spare yet remarkably beautiful, immediately took possession of me.  About a year later, I was getting ready to move one morning, and having a difficult time of it.  I played Sandy’s song Late November over and over again in my bedroom stripped bare of its bachelors.  The sound of her voice and the music she had composed kept me in a calm state throughout a very fraught day.

Although Sandy apparently did not identify as a Pagan–though who knows whither her own thoughts ran?–whenever she was asked where her songs came from, she struggled to find language to communicate what clearly was for her a trance state.  In one interview, she laughs wryly and tells the bloke she can’t remember a thing about composing one of the songs!  Her songs evoke mystical states and symbols: the holiness of nature, magical moods, the rising of the moon, following the North Star, listening for secret ravens cawing over a dark Tower, hearing the sea wash under the floorboards in London town, glimpsing the unicorn lurking in her own back yard.   She was something of a wild woman, boozing, laughing, bedhopping, drinking every man around her under the table.  Yet there is a kind of fragile beauty and a love for the unseen that emerges here and there in the fabric of her songs.  As she grew older, her voice grew slightly darker and just a shade more raw, but never lost its fine, pearlescent lustre.

It was very difficult to choose a poem for this short memorial.  I love All Our Days from the last LP she released in her own lifetime, bearing the significant title Rendezvous.  It is one of the poems we cherish from our beautiful Alexandria, known and remembered by her friends as Sandy.  May her spirit know true Peace.

We search for everything
Keeping what we would win:
Orchids or tiny flowers,
Wooden huts or ivory towers,
Centuries or hours:

Dark are the winter days,
Holy in many ways,
Vaults of time unshaken,
Whilst as through them we are taken:
Sleeping forests wake,
Ice melts on the lake,
Birds begin making their way back home.

The frost and the fire goes.
East winds and winter snows,
Sun upon the daffodils,
Dancing on the verdant hills,
Lambs in the fields.

Warmer grows the morning sun:
Days of youthfulness and fun,
The prime of the year begun,
The song of summer to be sung:
Everything is one.
Working day is done.
Watch the river running through our lives.

How slowly the colours change.
We feel the drops of rain.
Mists of evening rise again.
We rarely stroll the shadowed lanes
As autumn night draws in.

We sit upon the sand,
Warmth draining from the land,
Watching the ruby sun,
Setting on the ocean:
The echoes in the caves,
The flame upon the waves,
Memories for saving all our days.