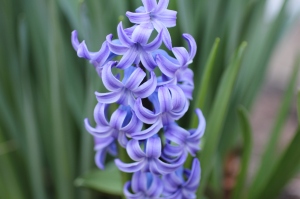 It has been said of old:

When whitethorn blooms at break of day,
Time it is to dance the May.

But here in New England, when I see the stately, regal, suggestively phallic plume of hyacinth in all his finery, I know that Beltane cannot be far behind.

Royal, rippling, with a heady fragrance that can make the mind reel towards strange fancies, it is easy in the present age of “Hyacinth Bouquet” to forget that Hyacinth was once a vigorously masculine name with mythic, ancient associations.  The name hyacinth comes to us from the Greeks, but the form of the name shows pre-Hellenic origins.  The youthful flower-god was connected with a Minoan origin among scholars of the early 20th century, but this theory no longer seems to carry the esteem of learned opinion.  But for the romantics among us, the image of a flame-eyed Minoan youth striding stately and solemn through the courts of Old Knossos is one that we will yield only with the greatest reluctance.  One tradition that was handed down by Pseudo-Apollodorus in antiquity had it that the beautiful Hyakinthos, whose ravishing form was like that of a young god, was loved by the mortal Thamyris, who was thus the first man known on Earth to love another male.  Because of this, Hyakinthos and the flower that bears his name became associated by the symbolist writers of the 1880s and 1890s with the forbidden raptures of male love.

The death of the fair Hyakinthos at the height of his powers, due to the jealousy of Zephyros, the West Wind, for the love the lad bore for Phoibus Apollo (for what flower loves not the sun?), enacts in mythic space and time the sacrifice of early Spring flowers to the often ruthlessly fickle weather of that “cruellest” of seasons.  Soon after, however, come the hawthorn blooms, and the lilacs with their heavy-scented boughs, and then in sweet revelry we dance to honor the May.  We go out hand in hand among the fields and lie in the sweet grass to let the earth Herself quicken with the love shared from our own loins.  So it has been since time immemorial, and so no doubt it shall be, so long as humans bear still within them some spark of rejoicing in the splendor of the renewed Earth, and the turning of Spring towards Summer.