Gift of the Magi

And so we approach in the calendar of the Christian liturgical traditions the Feast of the Epiphany, the Three Magi and their gifts of frankincense, gold and myrrh.  Frankincense for Priesthood, Gold for Kingship, Myrrh for Sacrifice. The Word Made Flesh. Epiphany held within every breath.

The topic of Esoteric Christianity is really beyond the scope of this fascicularium, but the triplicity of the Magi and their gifts intrigued me since three is such an important number in both Witchcraft and Druidry.  I even thought of treating the three gifts as symbolic of the Triple Self/ves: Frankincense for the Aware Self or Talker; Myrrh for the Fetch; Gold for the God Self.  Compounded together, the three gifts might compose an incense with very unusual properties.  All three substances have been used in healing formulae and workings of various kinds, in a number of magical traditions.

In Pagan Christmas, a huge compendium on the holiday compiled by Christian Ratsch and Claudia Muller-Ebeling, lore concerning the gifts of the Magi (or Magoi as they were named in the original Koine Greek) is discussed.  Their research reveals that in North Africa, the supply of frankincense was controlled by a community called Minoans who claimed to be the descendants of an ancient Minoan colony.  Such an exotic legend sounds like something right out of Rider Haggard or Talbot Mundy.

The lore about the association with the “Star,” the arts practiced by the Magi, and the Mithras cult is quite suggestive. Apparently the narrative about the Magi appears only in one of the gospels and seems to follow a passage in the writings of Pliny the Elder. Mithraism was a major competitor with Christianity when it switched from being just another mystery cult on the block to a contender for the title of sole religion of the known world (i.e. the Empire).  Tertullian refers to the Magi as sacerdotal Kings (and notes that Christians were not permitted to practice astrology; Ratsch and Muller-Ebeling comment, astutely, that Christ would have been called a magus by the Greeks and Romans of the day).

According to the catalogue of an exhibition mounted in Cologne in 2014, the iconography of the Magi did not exhibit royal paraphernalia until around 1000 AD. One of my favorite pictures in the book shows the Three Kings sharing a bed–WITH CROWNS ON–and an angel reaching out a hand to one, warning them not to visit King Herod on their journey homeward. They’re all tucked up under a blanket. Too dear. The source is a relief carving, presumably in a church somewhere. The show was Cologne because it is where the relics of the Three Kings were brought in Mediaeval times, from an Italian city. So it became the center of their cult, which was hugely popular.  This despite the disapproval of many Church leaders because, after all, the Magi were Pagan astrologers. The true history of Christian folkways, and the esoteric recuperation of all the lore remembered in folk memory, is so much more complicated than most realize.  Consider the vexed history of the cult of the Blessed Virgin Mary as yet another instance.

In German folk tradition, as reported in Pagan Christmas, one can cut  three white hazel dowsing-wands with a new knife and bless each in the names of one of the Magi. The wands can then be used for dowsing gold, silver and water. Another tradition postulates an echo of Jan. 6 as the Birthday of Dionysos (the cult was well established in Europe and still celebrated some centuries into the Christianization era so this may well be possible). You look up the chimney and count how many stars you can see, and that is how many glasses of wine you should imbibe on this night.  No wonder Three Kings Day became such a popular festival in many parts of Europe.

A painting of the Magi offering gifts from Ravenna (usually described as “Italo Byzantine”), dated 532 e.v.; they wear the raiment of magicians here, rather than the kingly regalia found in later representations. 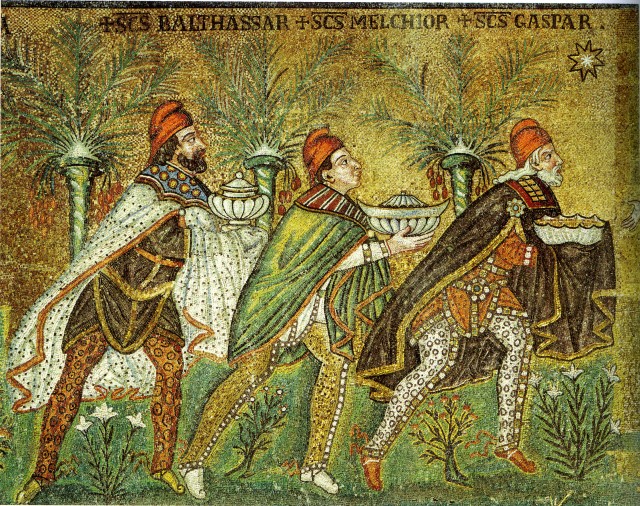